Roads on the brain. The 032 wasn’t the only community implementing a road improvement plan this past year. Just to the north of the 032, in the 331 (Cave Creek), there has also been some repaving and relining.

Both communities completed road projects this past year that included making more room for bike lanes and bicyclists.  For North Phoenix, it was quite an undertaking to complete one road.  About a 5 mile stretch of 32nd St (from Bell south to Cactus) was repaved, relined and had some signage put in place. Wasn’t the end all, but a step in the right direction. The area has a dense commercial and residential tax base in-place and was once the hub of commerce for the North Valley.  Don’t call it a comeback, been here for years. 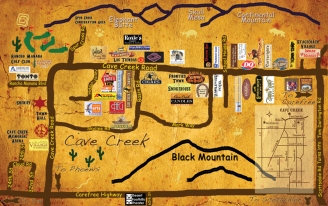 Along the way, medians were ripped out, plants in the medians were relocated and the medians were rebuilt smaller to accommodate the bikes lanes on the outside of the street. Boom, Boom.  Impressive how they knocked this project out. There were already quite a few bicyclists using these roads, but almost instantly the number seemed to multiply.

There is a small issue. There are bicyclists and then there are bikers. One is peddle power, the other is an iron horse with a loud motor. The only similarity is they both have two wheels.  The ladder group is part of a contingency in town who is very unhappy about this change in cultural philosophy; out with the bikers bars and burgers, in with wine bars and sushi. Not surprisingly there isn’t much crossover between the two groups.

If one has been unfortunate enough to read the Sonoran News of late, the war of words is on full display.  Last week I read one bicyclist responding to an article in which the author had said, ‘I will run you bicyclists off the road if you don’t move over’ (I’m paraphrasing). To which the bicyclist responded in a letter, ‘I will sue you for every penny if you even come close to me.’ Lovely. 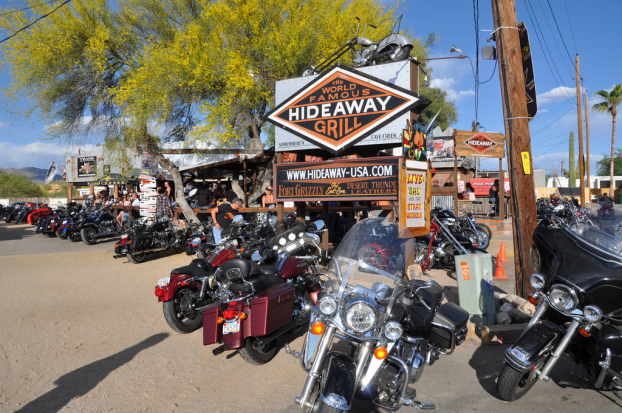 Cave Creek is a cowboy town that has always been friendly/welcoming to bikers.  You can’t have a Hideaway or Harold’s without them.  But there is also a huge contingent of seasonal residents who prefer more of the fine-dining environment. The business owners in both Cave Creek and Carefree have tried to accommodate this desire and there are some excellent dining opportunities. But seasonal venues have it rough, you really have to do some volume in 3-5 months to survive 9-7 months of nothing.  The bike lanes are a way for the community to continue to attract as many people year-round as possible. Snowbird, biker, cowboy, bicyclist, Cave Creek is a destination for everyone, all year round! (spoken like a true Realtor). Hope they don’t kill each other.

In finishing this thought, one thing comes to mind. The common trait between Cave Creek and North Phoenix is that both are havens for ‘Mom and Pop’ type venues. No question I love me some Chilies (they are a chain that does a good job). But there is no question, I am over corporate chains and bad gimmicks.  I want good food. I want people who work hard and care about what they do.  The only way to get this is:  to find businesses run by the people who own them. Maybe that’s why communities are spending so much time on roads, so people can find them?