The beginning of football season is upon us.  What an exciting time of year. Have stated before I bleed Purple, Viking Purple.  And that’s it, that’s the deal.  I don’t play fantasy football, I don’t gamble and I don’t hate on other teams.  Not much to say when your a Viking fan.

Been 50 some-odd years of misery, and hell, I’m only 43.  Started sufferin before I was even born. No matter, I watch the Vikings on Sunday. It’s ’bout the only thing me, my brothers and my Pops ever agreed on.

Having said all that, maybe this is the year? Have been listening to all the predictions come in.  Before ol’ “Teddy Two Gloves” nearly tore his leg in two, the Purple were getting a little love from the national media. ‘Dark horse’ contender for Super Bowl, maybe.  While they have been largely applauded for going out and getting Sam Bradford and at least attempting to save the season, most don’t believe there is enough time to incorporate a new starting QB and make a championship run this season.  Maybe so, we’ll see. 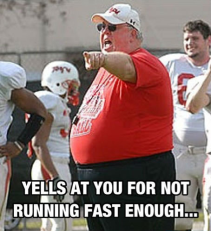 One thing I feel has been sorely overlooked however, is the fact that while not only beefing up their offensive line this offseason, they added quite a bit of coaching talent.  Former head coaches Pat Shurmur and Tony Sporano have joined Coach Mike Zimmer’s staff.  I do realize they don’t actually suit up and play. But here is a reality, the Cardinals have become one of the better franchises in all of pro football, and much of it is due to Bruce Arians demand when he was hired that he be able to assemble a first-rate staff, something the Cardinals had never allowed a previous head coach to do.  Hey they were the Cardinals and if there was an area to save money, they did.  Bill Bidwell’s son Michael now runs the show.  He recognizes even at the professional level, you got to ‘coach’em up.’

Think Jim Harbaugh has proven this point several times now.  Every group he has inherited has improved dramatically in his first season.  Love Jim Harbaugh.  Also a quick nod to my former high school coach Jerry Miller. Broke me down and built me up. Got the most out of this scrawny, angry, little outside linebacker. RIP Coach. You were the best, I love ya.

So here’s to great coaching and delusions of grandeur.  I predict an 11-5 season complete with their 2nd division title in two years. From there they steam-roll through the playoffs and go on to meet your local ‘Red Birds’ in the NFC Championship game in Glendale.  Then?  All bets are off.

Maybe a little hatin 🙂 Skol on!