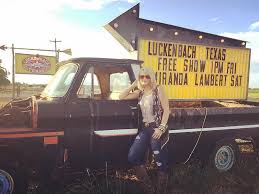 You ever heard of Luckenbach, Texas?  Got this song on my five disc changer in my shop.  Recorded by Waylon Jennings and Willie Nelson in 1977.

“Let’s go to Luckenbach, Texas
With Waylon and Willie and the boys
This successful life we’re livin’
Got us feuding like the Hatfields and McCoys
Between Hank Williams’ pain songs and
Newberry’s train songs and Blue Eyes Cryin’ in the Rain
Out in Luckenbach, Texas ain’t nobody feelin’ no pain”

Great song, have thought many a times I should head to Luckenbach and check things out. Maybe go to a show or two.  Like to feel no pain.

Turns out Luckenbach is a mirage.  According to author Peter Doggett in his 2000 book Are You Ready for the Country?, Doggett recalls that Jennings later told audiences that “he hated the song and (had) admitted ‘The guys that wrote the thing have never been to Luckenbach. Neither have I.”

So disappointing.  Move along young feller’ nothing to see here.

Like to experience a real Luckenbach, but I aint no sellout.

One thought on “Luckenbach, Texas”